http://www.troutdogs.com/writing-narration-production/wp-content/uploads/Michael-Head-Shot.jpgVoice actor, free lance writer and radio television producer living in Seattle , Washington. I am also a professional fly fisherman. My home water is the blue ribbon catch and release Yakima River, near Ellensburg, Washington. I offer select anglers a full day guided fly fishing adventure upon request. E-mail or all me direct. View all posts by mhamilton →

Fly fishing the Missouri River above Cascade Lake out of Craig Montana in early April is not for the average angler.  Snow, rain, hail, wind and sun are always in the forecast.  However the rewards of early spring fishing far out weigh any concerns for weather.  That’s why we spend $$$ on guide clothes, right?

This year, I selected the same dates to fish the MO as last year.  Big surprise.  Record snowpacks and cold temperatures extended winter well into early April.  However, we still caught “angry” Browns and “feisty” rainbows on adult skwala patterns as well as the short leash nymphing technique.  (See previous post)  If you go say hi to Headhunters Fly Shop owner Mark Raiser.  Ask for Jared Edens to guide you.  You won’t be disappointed.  (yes that’s a purple Skwala)

New article on chasing wild Rainbows in the “wilds” of Kamchatka, Russia

Fall streamer fishing on the Yakima River in Eastern Washington State is picking up. The rainbows are looking for a “big” meal as winter approaches. They can sense the weather change as water temperatures begin to drop. Its a quiet and peaceful time to be on the river. Big Horn Sheep are back in the Yakima Canyon. Look closely along the hillsides and you will see them. Short floats are best this time of year. Watch the water temperatures closely. There is a cold snap coming however it should warm up after the front moves through.

Just returned from the Missouri River, at Craig, Montana. Amazing fishing for big brown trout with a very cool technique – short leash nymphing. check it out and let me know if you have used this approach with success. 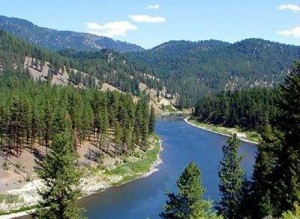 American Angler Magazine has recently published my latest article on the impacts of removing the Clark Fork Dam near Missoula. You can read it at my website under the link Free Lance writing. In researching the subject, I discovered the Clark Fork Coalition. Based in Missoula, it is a blue ribbon organization fostering environmental stewardship. The staff of professionals are committed to their mission and action oriented. I plan to write a sequel to the Milltown Dam removal article, focusing on current restoration initiatives underway and planed for the upper Clark for River – from Missoula to its head waters at Warm Springs.

Closer to home, in the Kittitas Valley of Eastern Washington, The Yakima River, my home 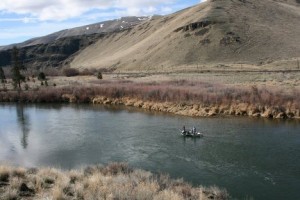 water, has several water quality restoration projects being coordinated and managed by the State Department of Ecology. We are planning an April meeting of key stakeholders including, state and local officials, landowners, farmers, and representatives from the yakima nation. Unlike other great western trout streams, the Yakima River needs an advocate organization to preserve and expand quality fishery and recreational opportunities for current and future generations. If you are interested in joining a mailing list to receive updates, please e-mail me direct at michael@troutdogs.com.

April/May brings the annual “flood irrigation” of farmland in and around the Yakima River, near Ellensburg. Toxic fertilizer runs into creeks like Cherry and Wilson that feed the Yakima River. Below Wilson Creek, the Yakima River struggles to absorb the brown layer of muck and debris. Solutions have included creating holding tanks to filter the irrigated water near where it runs into local creeks. Farmers argue that it’s too expensive to build. So year after year the cycle is repeated. It’s time to unite all stakeholders in an effort to create a strong voice for the long term health of the Yakima River. Troutdogs is exploring the establishment of a coalition to address the many issues that confront the use of this unique resource. Please contact me at Troutdogs if you are interested in participating. Future posts will provide updates.

Coming in 2011 – The Deadly Hatch – a new Miles Cavanaugh mystery

“What is it about the coming sunrise that makes the new day yet to be lived full of promise and possibility.  Where does the hope linger in each of us that the new dawn will bring something fresh, something undiscovered?  In the darkness, before the coming light gains quickly on the day, not pausing for a second to stop and rest awhile, I have felt giddy with excitement and apprehension.  Maybe even blessed, not in any religious sense, because I don’t believe in any one man’s religion, but more thankful to marvel at the colors and clarity of the moment while not knowing how the day will turn out. I would soon discover that no one in the Eastern Washington town of Cascade could have imagined what this day would bring, how it would turn out, as the sun broke above the horizon in a fiery blaze of glowing reds, smeared like a streak of paint across the new born sky.  It was an eerie scene. Thin, funneled shaped clouds with jagged edges, looking like an army of red tinged daggers, marched in columns ahead of the rising sun.  Someone up early for work or school or just coming home from the graveyard shift at Braxton Fertilizer must have thought to themselves, “Red Sky in the Morning Sailors Warning”, maybe even said it aloud.  But if they did, no one could remember hearing anything of the sort.  Too bad. “